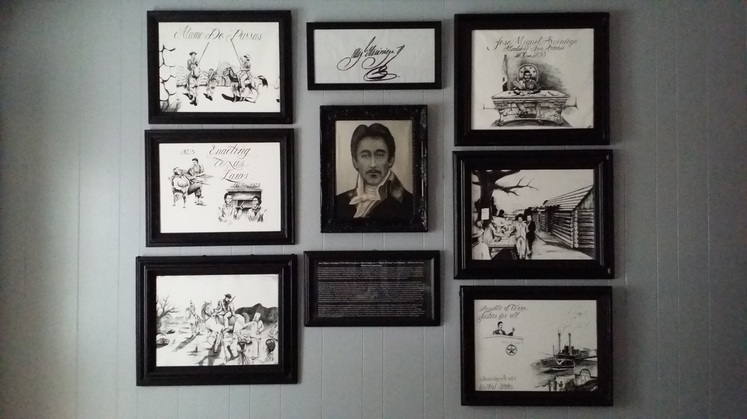 This is the FIRST HISTORICAL TIME-LINE ever created for any Texas Hero. Each drawing was created according to actual events that occurred in the history of Texas. This time-line was made by JMADS to honor our great, great, great, great grandfather Don Jose Miguel de Arciniega. This exhibit brings awareness for Don Jose Miguel's active duties as a Governmental, Military and Political Tejano Leader.  He was one of the first pioneers and in his 36 consecutive years of service he has proven how much he loved and respected his home; Texas.

The beginning of the Time-line Art Exhibit starts in 1810. Jose Miguel Arciniega was born in Santa Ana La Babia, Coahuila, New Spain on September 20, 1793.  His father Jose Gregorio Arciniega and Jose Miguel's uncle, Felipe Arciniega were skilled Mounted Lancers in the Spanish garrison called the Second Flying Company of San Carlos de Parras.  Jose Gregorio and Felipe Arciniega were sent by King Charles IV of Spain to San Antonio  to secure the Louisiana borders, become settlers, civil workers and to protect the people from Indian raids, and diseases. The two Arciniega men moved with their families to San Antonio when Jose Miguel was only nine years old.  Jose Miguel lived in the Alamo as a boy and remained in San Antonio for forty-six years until his death on May 1, 1849. Each drawing was created according to documents from different resources such as the Austin Papers, the Robert Bruce Blake Collection, and old Spanish governmental documents from the Bexar Archives. Jose Miguel made many contributions to Texas not only as a Tejano Leader but as "A Leader of Men for Texas" but  unfortunately they are not all captured in this one exhibit.

Jacob Guajardo is a twenty-six year old artist whose talents are beyond his years. He drew these drawings in pencil. It took a year to complete this project.  He was instructed on what to draw in each exhibit according to Texas History.  Jacob drew Jose Miguel from the official composite voted by the descendants in our organization.  The composite was created by David Baisden; a life long artist from Houston.

JMADS has accomplished many goals such as finding Jose Miguel Arciniega's childhood home.   He and his father Gregorio Arciniega built their first home around 1812. They rolled lime stones from the ruins of the Alamo to build the exterior of their home.   On Jose Miguel’s birthday, September 20, 2013,  JMADS dedicated this house to Jose Miguel; giving its name back as the “Arciniega House”.  It is  located on the corner of  Arciniega St. and South Presa St..  JMADS also donated to the Marriott Plaza Hotel a beautiful bronze plaque. It can be viewed from the Marriott's Courtyard which is located adjacent to the back porch of the "Arciniega House".  The inscribed plaque describes his attributes and contributions to Texas. Jose Miguel’s official composite was donated and presented to Maria Martinez the General Manager of the Marriott Plaza Hotel during the public unveiling. JMADS' members have become certified heirs of Jose Miguel. We have published booklets to bring awareness to the public of this long forgotten Tejano Leader.  Besides this Time-Line Art Exhibit  we also created an "Age Progression Art Exhibit" for Jose Miguel. Our biggest and greatest most recent accomplishments are the unveiling of a portrait of Jose Miguel in the Texas State Capital, and the approval of a Texas Historical Marker JMADS installed in front of his childhood home.

The Texas Historical Commission evaluated our application we submitted in 2014. JMADS had to write a narrative and submit supporting documents from the archives for credibility of what we claimed Jose Miguel did for Texas. The Texas Historical Commission approved JMADS and wrote the inscription on the marker for Jose Miguel; they wrote "Don Jose Miguel De Arciniega (1793-1849), A Maker of Texas”.  Our organization installed and dedicated this Texas Historical Marker to Jose Miguel on May 15, 2015 in front of the “Arciniega House” with family, friends and the City of San Antonio’s dignitaries. Joe Arciniega who is a descendant and a professional actor re-enacted a script he wrote to portray our great grandfather.  Joe delivered a vision and a message to our guests of how much  hard work, time and sacrifices Jose Miguel dedicated to become one of the Makers of Texas. This re-enactment earned Joe a well deserved standing ovation for his performance.

On November 6, 2015 the Texas State Preservation Board approved and placed Jose Miguel's portrait with his fellow Legislators as they all, including our great grandfather, wrote and enacted laws to build the framework of this great State of Texas. JMADS are honored to add another accomplishment for promoting and preserving Texas Tejano History, for educating the world of an untold significant story of Texas that contains mysteries of Texas History in the Spanish Colonial era, the beginning of the colonization era that became the Pre-Republic era,  to the time when the Republic of Texas was formed, and finally to the time of the Joint Resolution and the Annexation of Texas to the United States.  This is how long Jose Miguel served Texas as a governmental, military and political leader.

You can learn about Jose Miguel in these locations because JMADS has donated booklets written about Jose Miguel and  are displayed under Jose Miguel's portraits.  We encourage you if you are a descendant, student, or historian to please visit these sites to learn about this State of Texas recognized, amazing Tejano "Maker of Texas" and influential Leader of building Texas as it is today.

THIS ONE OF A KIND TIME-LINE ART EXHIBIT HAS BEEN FORMATTED INTO A BOOKLET.
TO ORDER A COPY  VISIT OUR JMADS SHOP
Jose Miguel Arciniega DescendantSociety